How do I protect my house from jinns?

Q0018: Salam can you explain what I can do to protect my home and my family from jinns?
بسم الله الرحمن الرحيم
Wa alaykum as salam and jazak Allah khair for your question.

This is no doubt a very important question and will save Muslims so much stress and problems if implemented correctly. Unfortunately Muslims today have neglected the importance of protecting ourselves and home.

Why is it important to protect the home? External jinns (which are outside, not inside the body) can also have an influence on the peace and tranquility in the household. They can give waswasah to the husband, wife and children. They may encourage a child to do actions that will annoy his or her parents and influence the parents to discipline the child very harshly.  They can make the wife feel suspicious about the husband, influence the husband to commit sin and be dissatisfied with the wife.

They can make a person feel lazy in salah and the list goes on and on.

We have a lot of questions from sisters about having nightmares and their children waking up scared in the middle of the night. And things can turn more sinister sisters feel the physical presence of jinn and can actually see dark shadows of things floating around in the room! Subhan Allah.

This is because our houses are mostly unprotected. Imagine going to sleep with your front door wide open and the lights switched off. You're practically inviting a burglar to burgle your house. The burglars always pick the houses which seem like easy targets and avoid those which has high security or other preventative measures.

Similarly if your home is protected from jinns then they will look else.

There is a quick and immediate measures of protection that you can take which is good for urgent situations. There are also short term measures but the affects last for a shorter period of time. Finally there those security measure which will take more effort but provide protection for longer.

This is the first step you should do if you feel the presence of a jinn in your room, such a such cold feeling on your limbs or a strong pins and needles sensation. Or if your child cries out of pain and you suspect there might be a jinn trying to possess them.

[Click here for more information about symptoms of child possession]

You can also do this calling the azan method if you live in a non-practising household where implementing the long term protection methods (mentioned below) on the whole house are not possible. This will enable you can protect yourself by preventing any jinn from entering the room you are in.

RESULT: This will cause any shaytan in your room to leave immediately and since you have closed the windows and doors saying bismillah he can not enter again.

Note: As soon as you've done this, do the second step as well as an extra precaution.

"When the call to prayer is made, Shaytaan flees on his heels and passes wind with noise during his flight so that he does not hear the adhan.  When the adhan is completed he comes back.  When the iqamah is pronounced he takes to his heels again until it is completed.  Then he returns again and whispers into the heart of the person and says to him:
"Remember this and remember that". So the person remembers those things which were not in his mind before the prayer began and as a result, he forgets how much he has prayed".

I have used this on many, many occasions during ruqya sessions and it works every single time. Without going into too much details there were situations where the jinn inside the patient was too scared to talk because there were external jinns (outside of the the body, in the same room as us) that would kill him because that was their job- to prevent the jinn inside from leaving.

Once I did the above method you could see the jinn had relaxed a little, and would say they want to leave but are afraid that they will be killed, So I offer them Islam and Ayat Al Kursi (Surah Baqarah 2:255) to protect them and they embrace Islam and leave the body. By the Will of Allah (swt).

"Allah! There is no ilah (deity worthy of worship) but He The Living, The Eternal One. Neither slumber, nor sleep overtakes Him. To Him belonges whatever is in the Heavens and on the earth. Who is he that can intercede with Him but by His permission? He knows what is before and what is behind them. They encompass nothing of His knowledge which He will. His Throne extends over the Heavens and the Earth, and the preservation of both does not weary Him. He is the Exalted The Immense One."
RESULT: Recite Aayat al-Kursiy when you go to bed, and no shaytaan would come near you until morning, and Allah would appoint a guard (angel) for you who would stay with you.

It was narrated that Abu Mas’ood al-Ansaari said:

“The Messenger of Allaah (peace and blessings of Allaah be upon him) said: ‘Whoever recites the last two verses of Soorat al-Baqarah at night, that will suffice him. (as a protection)’”

The next two methods do work but I would not recommend them simply because the effects don't last all night.

How to make ruqya water

4) Burn bakhoor or wooden incense that you have recited ruqya over. 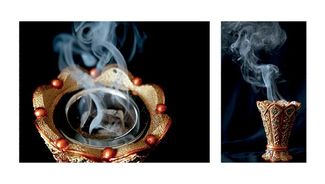 Bakhoor burning on charcoal in a bakhoor holder
This method will undoubtedly come across as dubious since it's mosly unheard of. those who have come across it will assume that magicians burn incense to attract jinns so this method must also be wrong.

You make ruqya bakhoor very much in the same way you make ruqya water, except you're doing the ruqya on the bakhoor. You then light some charcoal until its glowing orange and then place it in the bakhoor holder.

You then carefully add some of the ruqya bakhoor and allow the room to fill up with smoke. The idea behind it is that when the jinns breath this in it suffocates them. The bakhoor holder and charcoal can be purchased from any Islamic shop. Alternatively you can try experimenting with the fragrance by getting some wood chippings and making your own bakhoor by soaking the wood chippings in a perfume of your choice over night then doing ruqya on it.

I'm sure there will be some raqis who are unfamiliar with this method and will therefore might object to it. But the first point is  if you can make your own ruqya bakhoor it's better so there is no suspicion there. Secondly, if it is permissible to burn the pages of the actual Quran (mushaf) as a last resort (as mentioned by the scholars) then burning some wood that has had ruqya read on it is something far less in severity. Allah Knows Best.

A word of warning it should not be burned in a room where you or your family intent to stay over the next few hours because breathing in smoke or burning wood etc is bad for your health. It is maybe better to burn the bakhoor upstairs in the day and downstairs in the night.

Alternatively you can burn the bakhoor before going out for a few hours. 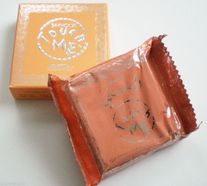 Bakhoor inside its packaging
I would only recommend this method as a last resort for someone who can't read the Quran and asks a practicing person to make the ruqya bakhoor for them.

Although this is something that we have found to work I would not recommend using it on a regular basis since its smoke that you are breathing in and it is not very good for your health.


RESULT: The ruqya bakhoor will cause the jinns to feel suffocated and get severe headaches. As a result of this they will be very reluctant to enter the house.


Note: Although Islamically there is nothing wrong with using this method it is always better not to rely on these as a primary source of protection.  Rather the protection mentioned in the hadith should always be given preference and these used as a secondary method. Also burning and breathing in smoke is bad for your health and the health of your family so please do not use it in a room that people will be in. If you use the long term method mentioned below you will not need to use any of the above methods insha Allah.

Sahl bin Sa`d said that the Messenger of Allah said,

This Hadith was collected by Abu Al-Qasim At-Tabarani, Abu Hatim Ibn Hibban in his Sahih and Ibn Marduwyah.

Even though Surah Baqarah will probably take 2.5 - 3 hours to read this is no doubt one of the most effective long term methods you can use to protect you home. After the finishing Surah Baqarah you can be at ease in the sense that even if you forget to say bismillah when you enter your house or leave the window open at Maghrib time no shaytan can enter your house.

RESULT: The way it works is that it creates an invisible force field around your house so when ever a shaytan approaches your house they will be faced with this invisible wall that they cannot pass. This may actually be an angel but Allah Knows Best.

2) Making the house a place of worship

Finally try to pray as much nalf as you can in the house. Read Quran, playing audio of the Quran is good but it cannot be a substitute to actually reading the Quran because of the effect it has. Make your house like the masjid and the shaytan will flee from your homes insha Allah.

Peace and blessings be upon the final messenger Muhammed (صلی اللہ علیہ وسلم) his family, companions and everyone who follow him in righteousness.

* Words of the azan:

La ilaha illal lah.'
Report a problem
Related Links
How to get rid of external jinns sent with magic?
How do I protect myself from jinn and magic?
How do I make ruqya water?
What are the four layers of protection?